What You Had for Lunch DOES Matter 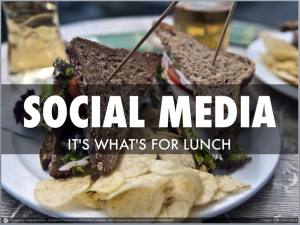 Remember the early days of Twitter, when nobody understood it? I was a fairly early adopter, and I remember that the number-one complaint I would hear from people who didn't understand Twitter was that they really didn't care what people had for lunch. To be honest,  I STILL hear this from those who don't like social media. Somehow they fear if they use social media, they will be wasting time hearing what people had for lunch.

My response used to be along the lines of "Well, if all you see in your stream is what people are eating, then you are following the wrong people." There's plenty of great content out there. But I do have to admit, the what people had for lunch thing has not gone away. Although social media has matured, we also now have things like instagram and pinterest, and even the hashtag #foodporn, so if anything, our lunch postings have probably increased. Why is this?

The answer is simple but powerful. Although social media is an incredibly powerful engine for learning, we continue to share inane bits of information because we want to connect. When I share a little piece of who I am, I present an opportunity for people to connect with me. Even if they don't act on that one tweet, a connection might be made, and the connections allow for deeper relationships to be built, and remember: the only work that gets done in this world, is done by people who have strong relationships with each other.

I laugh, actually, at the people who get so cranky about lunch posts on Twitter, but then head down to the office microwave to heat up their leftover curry (trust me, EVERYONE now knows what you had for lunch). Or they sit down at the office conference table to eat lunch with colleagues. This sharing of a meal does the same thing I'm talking about. The conversations are often superficial, but they allow us to be ourselves, share bits of who we are, and deepen the relationships we have with people at work. Relationships matter. So in that sense, so does lunch, whether you tweet it or not.

So if you're a leader, I suggest you start creating what we called in Humanize a "transparency architecture." Figure out how to share more, strategically, with others in the office. It's not what your mentors taught you to do. It may feel uncomfortable. But the leaders that figure this out early are going to be way ahead of those who resist.