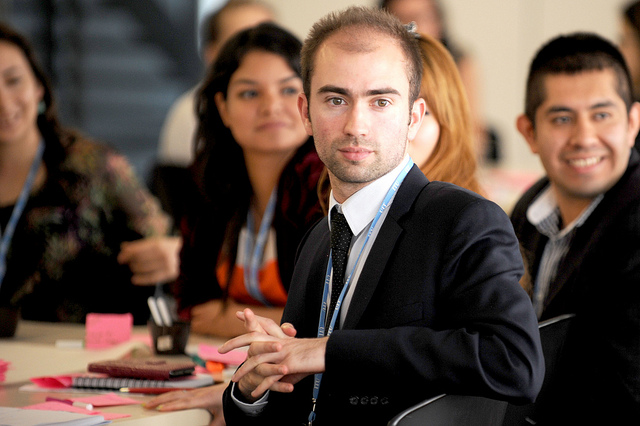 Warning: this is a fairly long post that delves into numbers somewhat deeply. But here's the good news: I've got some surprising revelations about the size of the different generations, so be patient and read through to the end!

It is commonly stated that Generation X is a relatively small generation, sandwiched between the two largest generations in U.S. history: the Baby Boomers and the Millennials. When you dig deeply into the numbers, however, a slightly different story emerges.

There is no denying, of course, that the Baby Boomers were named after the huge increase in births in this country following World War Two. Starting in 1946, births jumped to 3.4 million (from about 2.8 million the year before), peaking at 4.3 million in 1957, and then finally dropping back down below 4 million in 1965. That was our baby boom: 1946 to 1964, accounting for nearly 76 million births. Sounds pretty big, right?

Following the Boom we had the "baby bust," where annual births dropped down to as low as 3.1 million per year in 1974 and 1975. Even by the early to mid 80s it didn't get above 3.6 million per year. So you'd expect Generation X (defined by many as born 1965 to 1981, though I differ on that, which we'll get into in a minute) to be smaller than the Boomers, and that's what you get: 58 million births during that stretch. Boomers 76 million, Xers 58 million. So far the story checks out.

Then in the early 1980s, the Millennials started being born, and by 1989 we were back above 4 million births per year. During the 1990s and the early 2000s, we were pretty consistently at 3.9 to 4.0 million births every year. Sounds like another boom, doesn't it? If you count between 1982 and 2000 you get 74 million babies born, about the size of the original Boom. And if you add even just one more year to the range, the Millennials end up larger than the Baby Boomers.

Again, this is tracking with the general story we hear, but it turns out there's more, as they say, to this story.

Birth patterns do not actually define generations. As I explained in last week's post, generational differences are fundamentally about a difference in values, and values aren't really impacted when the number of babies born goes up or down. They change based on big-picture shifts in the social, political, economic, and cultural context within which a generation comes of age and shapes its values. So while the Baby Boomers were named after the demographic boom, that boom doesn't define them. What defined them was the revolutionary period we call the 1960s, and that means you really have to have come of age during that time to be considered a part of the Boomer generation. Or, more accurately, you're more likely to share Boomer values if you came of age during that time. That's why I use the definitions of the historians Strauss and Howe when defining the generations--because they pick the cutoffs based on the societal shifts (which impact values), not the birth numbers (which don't).

So by their definition, the generations are defined by the following cutoff dates:

This makes a huge difference. Whereas popular culture suggests the Boomers are a 19-year generation and X only 17 (and I've seen some sources give X only 10 years--1965 to 1975), Strauss and Howe argue that the Boomers cover an 18-year span, but X runs 21 years. And the Millennials have an even longer span of 23 years. Given that you have between 3 and 4 million people born every year, the length of a generation will have a big impact on how large it is. Is this "fair?" Well, there is no fair here. This is the judgment of two Ph.D. historians as to which segments of our population are likely to be more similar in values or approach. But at least they have a justification that is tied to the values--most who use the traditional argument pick their start and end dates fairly randomly.

So watch what this does to the size of the generations:

Yes, all those years of lamenting that Gen X was the small generation sandwiched between giants turns out not to be true, at least size-wise (it's a longer story, but Strauss and Howe do argue that Gen X is "recessive" and both Boomers and Millennials are "dominant" and I think there's some truth to that, regardless of size).

Oh, and remember, those are just birth numbers, which are historical, but when you look at the most recent population projections from the Census Bureau, it gets even more interesting. This is what they have for the population in 2014: 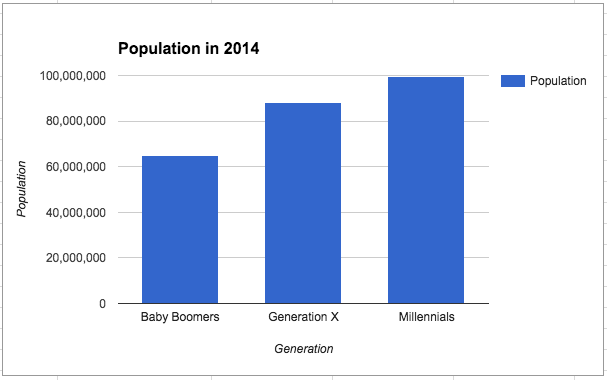 What?! How did that happen? Well, in short: immigration and death. Every generation in this country grows over time through immigration. Some of those immigrants come in at a young age and end up coming of age with their generational cohort, and some come in later, and may not reflect the generational values. But either way, every generation grows--or at least up until the point where the number of deaths in the generation starts to outnumber the inbound immigrants, and that's obviously starting to happen with the Boomers (sorry Boomers, but it was kind of inevitable). So yes, Millennials are currently 52% larger than the Boomers, and even Gen X is 35% larger than the Boomers are now.

So what does all this mean? The one thing that is consistent among all the stories out there is that the Millennials are the largest generation in the history of the United States. When you base your numbers in Strauss and Howe's theory, it just makes them even larger. They are 100 million strong, and as Maddie and I argue, that their power comes not only from their size, but from the way they are aligned with other huge changes happening in society, notably the social media revolution and the speedily declining domination of traditional, command-and-control management.

If you lead or manage an organization right now, you're at a huge choice point--whether you realize it or not. The Millennials are about to become the largest segment of the U.S. workforce, and half of them are still in school. They will dominate the landscape for decades. So your choice is simple: either create an organization that makes sense in this new "Millennial era," or start to quickly fall behind those who do. It's not because the Millennials are the smartest or best generation (there is no "best" generation). They are just huge, and they are at the right place at the right time. If you're not creating a culture that is aligned with these changes, then you should be preparing for decline. It's not about the flip flops and entitlement, people. It's about the future of work.