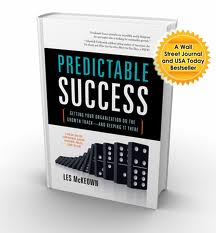 A few weeks ago, Maddie and I were interviewed about Humanize by Les McKeown. Les is a best-selling author of a book titled Predictable Success, and we were interviewed for his blog. I was really impressed with him during the interview. His questions were intelligent and showed how deeply he understood what we were talking about. I actually think he was more articulate about the book than I was!

So it prompted me to read his book, and I flat-out loved it. It’s called Predictable Success: Getting Your Organization on the Growth Track–And Keeping It There. I will admit, it sounds a bit too good to be true–achieving predictable success and then staying there. Really? Isn’t the world more complex than that? Aren’t half of the Good to Great companies now out of business? it seems like we’re almost destined to fail here.

I think Les would be the first to agree with me that predictable success is by no means an easy thing to do. But his arguments around predictable success are compelling. They revolve around an understanding of the different stages organizations go through in their growth. Predictable success is basically the apex of the curve. It’s hard to get to (you have to change and adapt as you move “up” through the previous stages), and it’s easy to fall out of (what got you there will naturally start to push you “down” into the stages of decline unless you work hard at it). That’s one of my favorite parts of the book. It recognizes the complexity and fluid nature of the growth pattern. There’s no one right answer–what you need will depend on your context. What worked before may be the opposite of what you need now. But he really zeroes in on some points that I also think are critical, like ownership, risk-taking, and innovation. I see why Les was interested in talking to us about Humanize.

The book is well written, engaging, and very clear. It’s the kind of book that makes me want to go out and talk to people in real situations about implementing the ideas. I highly recommend it.