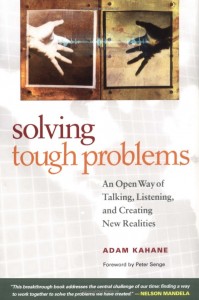 Adam Kahane was one of several incredibly smart and now famous people who worked for Royal Dutch Shell and developed the process known as “scenario planning” (or, alternatively, “scenario thinking”). I met him back in the 1990s when the organization I was working for brought him in to try and do some scenario work with Greek and Turkish Cypriots in an effort to make a breakthrough in that longstanding ethnic conflict. I’m not sure that we ended up making much progress with the Cypriots, but Kahane has done incredible work in other parts of the world, including South Africa during its transition away from Apartheid.

The book he has written is short but powerful. His focus is very simply on the acts of talking and listening, pointing out through stories of his work in conflicted organizations and societies across the world how we make things much worse through traditional ways of talking and listening and how new, more open ways can make things better. This openness is particularly important when the problems are complex.

Complex problems don’t have clear cause and effect relationships, and the people involved tend to have differing views of the world and the situation. In complex problems, the future is not clear or easily predicted. Complex problems require not only creative solutions, but they require a different process for coming up with those solutions. We have been trained to treat all problems as if they were simple, as if we just got the smartest people in the room for a weekend we could figure a way out and be done with them (remind you of your strategic planning process?). Kahane’s book provides the foundation for a different way, one that requires we pay much more attention to precisely how we talk within complex problems and how we listen.

We have a choice. We can talk and listen the way we always have, or we can decide to create something new. This book can provide you with a foundation for doing something new.