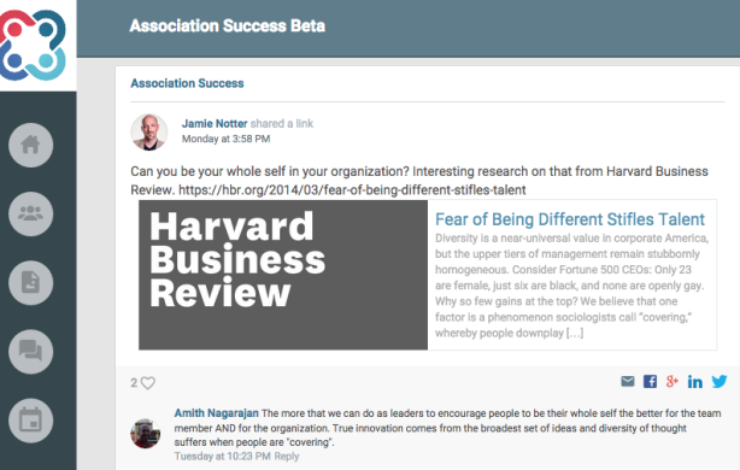 I’m just back from the ASAE Annual meeting in Detroit. It’s my 12th consecutive annual meeting. Over the years most of my clients have been associations, so this is obviously the place to be for me every year, though my participation at the meeting has certainly morphed since 2004. I attend fewer of the sessions these days and spend more time just talking to people in between or on the show floor or at the social events.

And it was during one of those informal conversations that I learned about an important new development in the association world: www.associationsuccess.org

Well, it’s not just the site that is important–it’s also the technology engine that is driving it. The technology is from a new company called Rasa, created by the established AMS software company, Aptify. They are calling it an engagement platform, but it operates much like an online community platform. Unlike the now typical community platforms, however, it seems to be focused more on bringing in content from outside the community, rather than just facilitating people within the community sharing with each other.

I’ve started playing around in the site, and I’m impressed so far. I shared on AssociationSuccess.org an interesting resource that Joe Gerstandt shared during his session on diversity in Detroit, and the next day the engine suggested to me an equally interesting TED talk about a black journalist studying and living in what he called “Whitopian” communities in the U.S. Very cool. For me, a community must be about learning, so I like that it pointed me to good stuff right away.

I look forward to exploring this community and technology a bit more. If you’re interested in associations and leadership, then go to www.associationsuccess.org, create a profile, and start reading, commenting, and sharing content. I’ll be really interested to see how the technology works with more people in it.