Social Media is the Wave 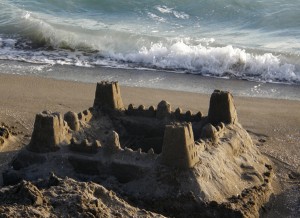 Let’s say you’re on the beach building a sand castle. It’s a nice sunny day, and you build quite a masterpiece with towers and moats and walls (heck, it can have a working drawbridge for all I care, because this is just a metaphor after all). Then a big wave comes in and rides so far up the beach that it actually hits your castle and knocks one of the towers down. This obviously gets your attention as you seek to rebuild that corner of the castle, and you might even get mad at that wave, or come up with theories about why that wave behaved the way it did and how you should re-configure things to account for that wave.

I get the focus on the wave and that now-goopy corner of your castle, but let’s be honest here. If your concern is the whole sand castle that you built, then the wave is not the real issue here. The real issue is that the tide is coming in. That one wave is evidence, and that one wave has real implications for the here and now that you should deal with, but you need to see that the tide is coming in, because that will require a whole different set of actions. Like figuring out a way to transport the whole castle back to the area unaffected by the tide. Or giving up on that castle and enjoying watching the waves roll in and knock it over one piece at a time.

As I said, this is a metaphor. The sand castle is your organization, and that first wave is social media. Social media rolled in and really knocked your marketing for a loop, didn’t it? It changed things so much, the whole organization probably noticed. But if we focus too much on social media and what it is doing to our marketing, we run the risk of missing the bigger picture.

The tide is coming in. Social media is giving us a bit of an advance warning that things are changing. The wave of social media made it so far up the beach for some important reasons (like it allowed the people involved to create and share and build relationships–things that make us human). But those drivers are bigger than social media. This is the crux of what we are saying in Humanize, which is why the book isn’t really a social media book. It’s much bigger than that.