The Feeling of Failure 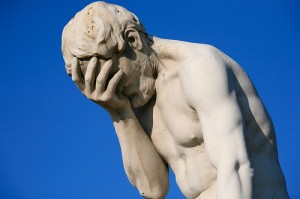 In Humanize, we talk a lot about courage. Courage is one of the four human elements–arguably the hardest one for organizations to master. Fear has long been at the root of organizational dysfunction. We are arguing that we need more courageous organizations. Ones committed to learning, experimenting, and supporting personal development among its people.

To do all that, however, we have to confront failure. In many cases, THIS is what we are afraid of: failing. But as Seth Godin points out in a recent post, what we are actually afraid of is the FEELING of failure, not the actual impact or costs of the failure.

This is huge. When we fear the FEELING of failure, then there are TONS of potential actions that we will avoid for fear that we will fail. That’s one of the biggest problems with fear, or a lack of courage: it causes us to NOT act. The feeling of failing will hit you whether that experiment cost you $10 and 15 minutes of time, or if it cost you $100,000 and two FTEs for a year. It still feels like failure.  You want to avoid that, so you don’t act.

So we need to work on our emotional intelligence and let go of that negative feeling that washes over you when you feel the failure, so we can open our eyes and evaluate the costs of what failed and focus on the learning. If that feeling became less of a big deal, then we could be trying new things every week, watching many of them fail and gleaning learning that can be applied to the next experiment. And we’d be able to talk to other people in the organization about the failure (because it wouldn’t have that stigma attached to it). They’d be learning too. This can create a flywheel effect.

After I spoke recently about Humanize, someone came up to me to tell me about an award they gave at their organization called the “Spatula Award.” It was to celebrate a failure or a mistake. It is a small thing, but it actually helps to remove that negative feeling you get from failing. It’s not that they embraced failure all the time (the idea behind the “spatula” is that if you get this award too many times, they may end up just giving you the spatula to use at your next job–flipping burgers). But they’re making it okay. Look for ways to convey that message and see if it helps your people to try more things and focus more on learning.