Below are the top 8 blog posts of this year, as ranked by page views. It’s hard to do a straight, objective ranking here, since looking at page views on an annual basis gives an edge to the older posts, so I looked at three-month-blocks and tried to pick out the ones who had the highest views in those chunks. Of course in the later months, I put in place some automated marketing, so it is hard to compare. So here are the posts that (generally speaking) got the most attention this year: 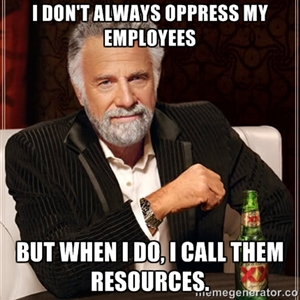 1. An Open Letter to Human Resources

This was hands-down the top post, mostly thanks to SmartBrief who linked to it in one of their newsletters. I’m glad it was popular, though, because it was one of those rants that I just HAD to write, so I’m glad it resonated with people.

2. The Connection Between Strategy and Operations

This was a fairly close second in terms of views, and the only other post (other than number one above) to get more than 1,000 views over a three-month period. Interestingly, it’s a follow-up post to one I wrote about “transient strategy,” and I thought the first post was better!

Number three goes to my not-rhetorical question about the CEO’s job. The follow-up post gives the beginning of an answer.

This was the most popular post in the first half of the year, for sure. I know this strikes a nerve with people, because I hear that complaint a lot. This one also got kudos because everyone loves the “proceed until apprehended” phrase.

5. I Don’t Want You to Humanize Your Brand

This one was also a bit of a rant that struck a nerve, and the fact that I get up in the face of “brand” also accounts for the attention (marketing people get a little touchy when you challenge “brand”). Though I think they basically agree with me that you need to humanize the organization more than just the brand.

6. Recognizing that You Suck

It’s quite possible that adding “suck” to a post title guarantees you some hits, although in this case, the story of the CEO who wrote a brutally honest blog post talking about his tough 360 review might have been enough to get people’s attention.

I’m glad this one made the list, because I think it’s such an important conversation.

Who knew a vacation post would get so many views? Well this one caught the attention of some good folks in Key West and made the Facebook circuit.

Thanks, everyone, for reading my posts this year. I never knew blogging would be so important to me. I resisted it for a long time, in fact. But in the end, I really love it, so thanks for all the views!