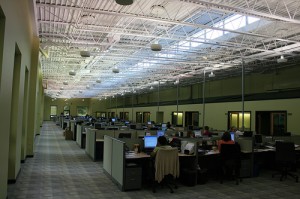 Last April I posted about what I think is a misguided obsession, sometimes, with proof. Well, I’m starting to get bothered again, and this time it is in the context over the debate about the effectiveness of the “open office.”

According to one article, the open office movement was sweeping the country in 2013 because it is so undeniably awesome:

“Open office design is becoming more and more widespread because of the productivity gains from collaborative spaces,” said Sara Herman, director of interior design at SVPA Architects in West Des Moines. “It’s happening first, because work in general has become more of a collaborative process, and second, because the younger generation is more accustomed to being able to work in a more collaborative way, which is a big thing in education. They don’t want to be chained to a desk and they’re bringing those changed expectations into the workplace.”

But not so fast! It turns out there is hard evidence that open office design is a miserable failure. According to a recent New Yorker post, in 1997 a large Canadian company studied the effects of moving into an open office environment, and the conclusion was not pretty:

The employees suffered according to every measure: the new space was disruptive, stressful, and cumbersome, and, instead of feeling closer, coworkers felt distant, dissatisfied, and resentful. Productivity fell.

Whoa. Doesn’t sound so awesome, does it? And not only that–open office design actually makes you sick! According to one Danish study quoted in the New Yorker post, the more people that work together in an office space, the more sick leave people take:

So let’s take a step back for a minute.

I don’t know the details of either of these studies, but I do have some questions. In the first study, they conclude that the new space was disruptive and cumbersome. Okay, but open space is obviously designed to increase collaborative effort. What if the people they had there were not particularly good at collaboration (after all, they previously were holed up in their individual offices and cubes, apparently)? For people who suck at collaboration, open space is going to be disruptive. But is that open space’s fault, or the people’s fault? And what if the tasks they are assigned do not require collaboration? Put 20 people around a conference table and ask them each to record their own podcast, and I’ll show you a dramatic drop in productivity. There might even have been some other change that was introduced at the same time, which could have impacted the results. My point is, this is a complex system, and I don’t like it when we try to oversimplify our analysis. As if it’s as simple as “change office design, therefore increase productivity.”

And the claim in the New Yorker post that open office “may even have a negative impact on our health?” That one just pisses me off. The study measured sick leave taken–not health. It’s absolutely true that more sick leave was taken by people who worked in a space with others. But honestly, I don’t see that proving, necessarily, that more people are getting sick. I could easily interpret that as more people (finally) having the decency to stay home when their sick, instead of convincing themselves that if they stay in their office most of the day they won’t infect the rest of us (a theory that I’m not sure has actual proof).

Honestly, I don’t think the open office debate is as simple as either side makes it out to be. Collaboration and cross-silo communication I think is critical in organizations, and individual offices and cubes can get in the way there. Best coworking spaces in Singapore are a good proof. I think that generational point made in the first article is interesting, and they may be on to something. On the other hand, as human beings we need quiet, and we need privacy. And not all tasks benefit from collaboration. We need to figure out a way to get these conflicting needs met, and I think that’s going to require some innovation in office design, but this is NOT a question of open or closed. It’s just not that simple.