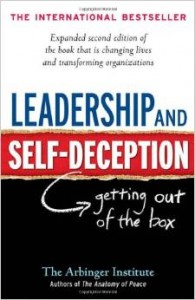 Leadership and Self-Deception: Getting Out of the Box

by the Arbinger Institute

This book argues that many problems we face internally in our organizations (conflict among employees or silos, nasty bosses, ineffective employees, etc.) can actually be traced back to some basic psychological defense mechanisms in all of us. The truth is, every organization is run by human beings, and all human beings have egos to defend. And in the course of business, we are often not aware of how those deeper, ego-based psychological drives end up distorting our reality and generating behavior that really doesn’t work. For other more interesting tales go through Books First blog now.

The one that the book focuses on is the human need we each have to portray ourselves in a positive light. We all deeply want to see ourselves as a good employee, a good boss, a good team-mate, and even a good parent, or a good spouse. And there’s nothing wrong with a little positive self-esteem, but when things get tough or stressful, you’d be amazed at how quickly our brains paint a picture of the “other” in the situation as less-than (selfish, overbearing, micromanaging, lazy, biased, out of touch, too negative, too positive, etc.). It happens quickly, and almost sub-consciously. But doing so allows us to meet that psychological need of being good and right.

My favorite easy example of this is our reactions when driving a car. Every time someone moves into our lane without seeing us or pulls out in front of us, we are instantly outraged. We typically launch into an angry diatribe inside our own car about how this other person is a complete and insensitive jerk (which is much nicer language than you’d use in the actual situation). Yet those other times when you’re distracted and move into someone else’s way, or pull out because you didn’t see the other person, you know that it was a simple and honest mistake. In fact you’ll get all huffy when they honk at you. It is an instant and visceral reaction: you are justified, and they are not.

Those are fleeting moments with complete strangers, but when this dynamic starts playing out at work, it can have negative effects. The book itself is written as a story about a company that outperforms its competitors specifically because every employee is coached in this dynamic. It enables everyone to focus on results and hold each other accountable, but without the defensiveness, posturing, and water-cooler gossiping that usually goes along with it.

I recommend this book. It’s a quick read, particularly since it’s written as a story (though to be honest, Patrick Lencioni is better at this art form; this one gets a little slow at times), and it is gets into an important aspect of leadership in today’s world: that as individuals the bar is being raised when it comes to our development and awareness. The people who do the work on the self-actualization scale are going to be the bosses that the Millennials want to work for, because as a generation they were not schooled in being “less than” as much as we Xers and Boomers were when we were kids.