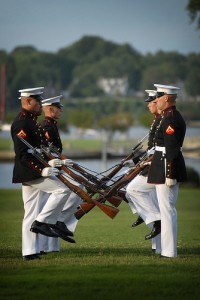 In Belgium a couple of weeks ago I had the pleasure of hanging out with Olivier Blanchard. He is ridiculously smart, and a fellow Que author–his book is called Social Media ROI. It is actually quite a nice complement to Humanize (I think Maddie describes it as “Olivier’s book is the how, and our book is the why”). I used an example in his book during my session that delved into some detail about how you humanize your organization (more on that in another post).

But in my first presentation, I made the point that many organizations fall short when it comes to clarity. We don’t give clear instructions. We don’t provide clear rationales. We aren’t clear about what strategic principles should drive decision making. As Maddie reposted, recently, we’re not clear in our “middle level thinking.” After my session, Olivier asked me if I had noticed that organizations that were better at clarity were led by people who had been military officers earlier in their career.

I didn’t have data on that one, but it was an interesting question. Olivier had been an officer in the French military, and in his officer training the need for clarity was reinforced over and over again. Everyone knew that success in the field depends on the troops being very clear on the “commander’s intent,” because when the bullets start flying you won’t have a chance to double check with anyone. They just held themselves to a higher standard when it came to clarity. In short, they were more disciplined about clarity.

This got me thinking about the word “discipline.” In Humanize, we talk about the need for decentralization and openness. You would think this would make our ideas incompatible with military culture. The military pretty much coined the phrase “command and control,” after all. And a part of that command and control is discipline. Making people do things in a very particular way and pushing them hard to meet the standards.

But I have to be careful not to fall into the trap of viewing the military from a solely “Hollywood” lens, where drill sergeants make recruits do stupid or humiliating things to toughen them up. In my conversation with Olivier, I began to see a more nuanced and powerful understanding of what military discipline really means.