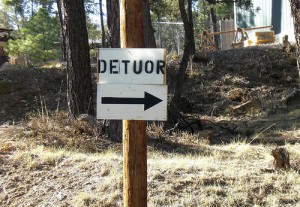 On Tuesday, Maddie and I presented at the Blogworld New York conference, along with Amy Sample Ward from NTEN. It was fabulous to present with Amy. She told great stories about how NTEN actually puts into practice a lot of the ideas we express in Humanize.

One of the examples was NTEN’s comfort with talking publicly about failure. After their recent conference, they actually wrote a blog post listing parts of the conference that did not work out well. Would your organization do that? In public?

Comfort with failure is a critical piece of a human organization. We write about this in the book in the chapter on being Courageous. Courage is ultimately about taking action–moving forward even though you are afraid. One way you enable courage is by maintaining a disciplined focus on learning. We learn from what we do, so we’re not as afraid to move forward. If we fail at something, it will fuel learning, which will enable us to do it better next time. Failure is good.

But during the session, someone asked Amy a question about NTEN being comfortable with making mistakes, and Amy was quick to jump in and clarify. “We don’t define failures and mistakes the same way,” she said. A mistake is when you do something wrong, even though you knew the right way to do it. Failure is when you are trying something new, and you don’t know ahead of time how to make it successful. A typo in a conference brochure is a mistake. It’s not like you didn’t know how to spell the word correctly. NTEN is not “comfortable” with mistakes as it is with failures. They work very hard to eliminate mistakes. (Though I doubt they are the kind of place to ruthlessly punish people for making mistakes either.)

But they are okay with failure. They love to learn from what they are doing. They recognize that if you don’t fail some of the time, then you aren’t pushing hard enough. You aren’t growing. Eliminating failure would mean doing ONLY what you already know how to do. You don’t grow that way.

So take a look at your organization’s culture and be honest with how comfortable you are with failure. How open is your organization with what it is learning from these failures? Are there parts of your culture that need to change for you to enable people to take more chances, be more open about failures, and put a stronger emphasis on learning? This is what leadership looks like in the 21st century. Let’s get to it.