Preparing for an Entirely New Economy

Preparing for an Entirely New Economy 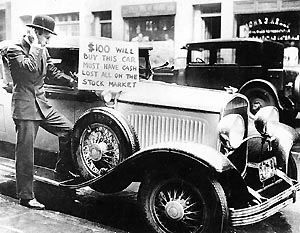 This article by Steve Denning on Forbes.com really hit me. Much of it cites Joe Stiglitz, a Nobel Prize winning economist who has an article in Vanity Fair that argues our current economic downturn isn’t just a cyclical dip, but the mark of a significant phase-shift in our economy, similar to the phase-shift that happened around the Great Depression. I am normally one to be skeptical at “this may be the big one” arguments, but the whole Nobel prize thing kept me reading.

And he certainly makes a compelling case. I am not a saavy investor who got in to buy Apple shares UK at the right time. I was kind of embarrassed to face the fact that my understanding of the Great Depression boiled down to random ideas and phrases like “stock market crash,” “dust bowl,” and “new deal.” My analysis: it was really bad and World War 2 (and the manufacturing economy spurred by the war) got us out of it. You’d think after all my education you’d get a more nuanced understanding. No matter. Now I can just point to the article. 🙂

Stiglitz pointed out that the depression was a result of a huge shift in our economy, from agriculture to manufacturing. We HAD to have that depression to deal with the fact that our large portion of our workforce was focused on doing something (farming) that wasn’t going to make money and be sustainable like it used to be. We needed to shift into a phase where farming was much smaller and manufacturing was much bigger. You don’t do that by retraining people over a two year period. You need a structural adjustment. Stiglitz argues that the banks failing, etc. was a RESULT of this shift, not a CAUSE of the depression.

So today we might be in a similar boat. This is the time where we finally have to shift AWAY from the manufacturing economy. Stiglitz says it will be towards a service economy, but Denning suggests it will actually be a “creative” economy.

Innovation, nimble, continually offering new value, trust…sound familiar? This is what we talk about in Humanize. We hadn’t thought about it in terms of preparing companies for an entirely new economy, but hey, if that what it takes, we’re game! Denning talks about that:

Most large firms of today are ill-equipped to compete in the emerging Creative Economy, in which globalization and the shift in power in the marketplace from seller to buyer have put the customer in charge.   Most big firms still have a factory mindset oriented to economies of scale. They are focused principally on maximizing short-term shareholder value. They are not organized for continuous innovation. This way of managing is unable to mobilize the full creative talents of their employees.

Or their customers. I know it’s hard to believe, given the collective accomplishments of all the large companies in today’s economy, but the power of our existing approach is in decline. And if we really are in an economy-phase-shift, then the rate of decline is only going to increase.