Rant About the Stupid Stuff Being Said About Generations 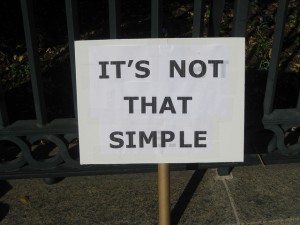 It’s Friday, so I’m giving myself permission to get a little angry.

I am hitting my limit of the amount of crap that I can stand to read about generations in the business literature, and particularly, of course, the millennial generation. If you are nodding in agreement, thinking “Yeah, all that generations stuff is bunk,” then prepare to be disappointed.

Generational differences are real, and they are important.

What I am angry about is actually the widespread ignorance of what generations are and what they are not. A case in point is this article over on the Fast Company website that claims to be debunking the “myth” that all Millennials are the same.

What?! Who on earth thinks that all Millennials are the same? I am dead serious about that question, because the answer is NO ONE. Not a single person on the face of this planet would ever admit that an entire group of people (let alone tens of millions of them) are all the same. It’s a patently stupid idea, so please spare me your effort to debunk a myth that only exists inside your head.

Do people misuse the generalizations about the different generations? Of course. It’s called stereotyping, and humans do it with all kinds of differences. But that does not negate the differences, not does it imply that everyone believes, literally, that all the people in that category are the same. It’s really more a case of wrongly applying generalizations to some unique individuals that you’re dealing with. It’s particularly ugly when people pick up on a negative stereotype (like “Millennials are entitled” or “black men are dangerous”) and use it to interpret, say, the specific young people in their office or an unarmed black man in the street.

When we resist the idea that generational differences are real, we are giving up in our battle with complexity, and that spells bad things for organizations. It is a retreat, back into a world where we don’t have to face the paradox of sameness and difference existing at the same time within a group (at least along this identity line). Some will dismiss the sameness and say we are all just individuals. Others may rigidly embrace the stereotypes and declare all Millennials to be entitled. Both of those choices reject the complexity, and the number of organizations that will thrive in the coming years by rejecting complexity is going to decline very rapidly. If I were you, I’d get up to speed on generations and choose to deal with the complexity.