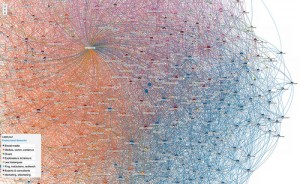 So MIT and Deloitte have done a repeat of their 2012 report on Social Business (that I cite frequently in my Humanize keynotes). They aren’t releasing the full 2013 report until July, but they did a blog post teaser.

The big (though not surprising) news: social is growing in importance. They asked the 2500 respondents to identify whether or not social business is important to their company today, and in EVERY SECTOR the percentage went up this year compared to last year.

But here’s the kicker:

The survey also found that while companies in most industries are generating social data from their initiatives, few businesses in any industry were analyzing the data or integrating it into their organization’s systems and processes. (my emphasis)

If you think social business is about using social media, you’re missing the point. Using social media is basically your entry in to the game, but if you don’t explore aggressively how to make the rest of your organization work not only with social media but the underlying principles and approaches behind social media, you’ll continue to fall behind. Gathering data and not integrating it into decision making is an indication that we’re not figuring this stuff out. And that’s just the data part. What about the cultural elements of trust, transparency, and decentralization that are needed to leverage the power of social media?

The companies that figure that stuff out will have a competitive advantage.