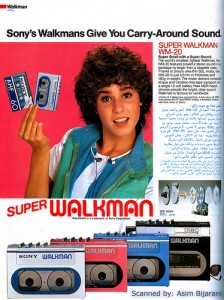 Sohrab Vossoughi wrote a great post on HBR about Sony and how its successful strategy in the 1980s ended up being unique to that context. In other words, a winning strategy is context specific, thus it needs to evolve and grow (we talk about this in Humanize in the chapter on Generative). Sony’s model didn’t evolve, and now it’s in trouble. In the middle of the post, he talks about how the economy has shifted, where consumers now care more about experience, rather than just product. Here’s the excerpt:

In the early 80s, simply delivering technology in a usable form was still the biggest challenge, and Sony got it right before anyone else. It had an astonishing ability to find the next technical hurdle—a brighter TV, a smaller tape player, an integrated camcorder—and leap over it with grace, before its competitors even thought to try. In an industrial, product-oriented economy, this was enough. Every year saw new products with unprecedented capabilities. As long as it could do something new, we didn’t seem to care what kind of experience we had using it. Plowing through 70-page manuals and fussing with Dolby II and Metal/Non-Metal switches was just part of the deal.

In the experience economy, these expectations are reversed. Technology is a given, and the question of “what are the specs?” has been replaced by “what is it like to use?” Sony’s expertise at making the next great thing has been matched by companies like Samsung and LG, and soon enough, they’ll all be caught by increasingly sophisticated Chinese manufacturers. Without modifying its business model, Sony has been left behind by a world that’s changed its relationship with technology.

The post is about Sony. And it’s not about Sony. It’s about all of us. That last sentence seems hugely powerful to me. Just make “Sony” and “technology” fill-in-the-blanks spots, and it hits home for most of us:

Those are just postulates, actually (well, with the exception of the newspapers; I think that one is a fact). But I think no matter what industry we’re in, we need to have our radars tuned to whatever goes in that last fill-in-the-blank spot. What RELATIONSHIP is changing in our market, and are we responding?

I also really like the last sentence in the first paragraph, where he talks about what people put up with as “part of the deal” before the relationship changed. That might be something to try and focus on when identifying a changing relationship. What is your company’s (or your industry’s) equivalent of “plowing through 70 page manuals and fussing with metal/non-metal switches.” These are things that were required when you were delivering last decade’s value, but now are viewed as unacceptable obstructions since the relationship has changed. Maybe something like putting up with lame keynote speakers at conferences?