The Problem with Committees 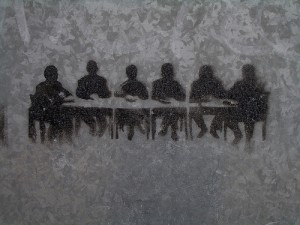 Here’s the problem with committees:

I’m only partially joking here. This comes from a comment I left on a post on Eric Lanke’s blog (which, by the way, has shifted from the Hourglass blog to simply “Eric Lanke,” so be sure to switch your subscription). He had written about an experience he had on a committee that wasn’t pleasant and was reflecting on how the Chair might have “lead” the committee differently.

But as I read what he was writing, I was coming to the conclusion that the very existence of committees was the problem, and debating how best to lead them was futile. This is not a new idea, of course. Jeff De Cagna wrote “No More Committees” in our “We have Always Done it That Way” book five years ago (yes, FIVE years ago!). I agreed with his point then, and I agree with it now.

But as I was thinking that, I also thought, wait a minute. Aren’t I a big fan of de-centralization? Shouldn’t I like the fact that we allow the system at large to have committees to get work done? Isn’t the alternative simply leaving everything up to the Board or the staff–making it all centralized?

No. This is one of the biggest problems facing the association world today. We are confused about decentralization. We argue that the members “own” the association, and our governance structure, including our standing committees, is part of that. It’s how we “engage” our volunteers in the work of the association. It’s how we “develop” our “leaders” by giving them the opportunity to show us they have what it takes to lead.

That is misguided. Committees, in that way, are miniature Boards. They just have a more limited domain (like membership, or education, or government relations, etc.). That is not decentralized. That is fractured. That makes things even worse because it gives the committees (and particularly the committee chairs) the notion that they are in charge of their domain (in a very centralized way). It takes “centralized” and reproduces it in multiple places. That is VERY different from decentralized. And I don’t think it’s a good venue for developing true, systemic leadership.

Decentralized means shifting power from the center to the periphery, but in a way that understands and honors the nature of the whole system to begin with. When we create islands of control in the form of committees, we are not honoring the integrity of the system. We are not shifting power to the periphery. We are praying that a blind delegation of very limited decision making authority will not come back to haunt us later as we implement our centralized plan. I think that’s what Jeff was talking about five years ago when he recommended getting rid of committees, and instead enabling small groups to form to solve specific problems for the association, and then dissolve. Or, as Eric said in a reply to one of my comments, they are called task forces and a lot of associations are moving in that direction.

Really being decentralized is going to look and feel a lot different. Committees (or task forces, or whatever you want to call them) are more likely going to emerge, rather than be assigned by a nominating committee. Leadership of those committees will not be based on the control and authority of a “chair” (since when is a chair a powerful thing? It’s an inanimate object!). Leadership will be more facilitative, because the goal is having a positive impact on the system, not ensuring that my committee gets an increased budget next year. We’re going to reduce the value we give to reports, minutes, and task lists, and we’re going to increase the value on communication, problem solving, and collaboration.

If this interests you, then start working on it today. Don’t abolish your committees (because they will fight you tooth and nail). Just start creating these new groups in parallel. May the best model win.