The (Questionable) Value of Being the Authority 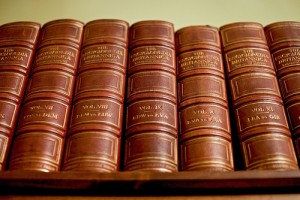 So I know this is going to come as a huge shock to everyone, but Encyclopedia Britannica is going out of print.

They’re going to stick with their online encyclopedia and a set of educational curricula (which actually accounts for 85% of their revenue anyway…who knew?). I think most would agree this is a good call. In the New York Times article about the move, there was some discussion, as you might expect, about the Britannica/Wikipedia conflict and the role of the Internet in general on this issue, and Gary Marchionini, dean of Library Sciences at UNC, made an interesting point:

“There’s more comprehensive material available on the Web,” Mr. Marchionini said. “The thing that you get from an encyclopedia is one of the best scholars in the world writing a description of that phenomenon or that object, but you’re still getting just one point of view. Anything worth discussing in life is worth getting more than one point of view.”

There seems to be a broad sentiment among associations that one of their main competitive advantages is the fact that they are the experts. Their members and staff have vetted the wild and crazy content that is on the internet and give you the straight, authoritative, expert truth. And there’s definitely value there. But that last sentence from Mr. Marchionini sticks with me. It’s still just one point of view. I get that it’s an expert point of view, and I like that. But it’s not enough.

The truth, it turns out, is not as singular as we thought it was. For the things “worth discussing in life,” anyway, that singular truth isn’t all of what we need. I think there is still room for associations to be the experts and provide that expert truth. But I think it also requires a shift in how they expect people to use that truth and what it means. Maybe less of a defensive posture that advocates for the supremacy of your truth, and more of a facilitative approach to supporting those discussions that are worth discussing.