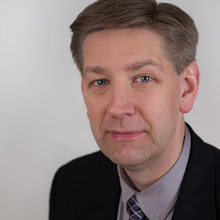 If you don’t know Eric Lanke, you should. He’s the CEO of the National Fluid Power Association, located in Milwaukee, Wisconsin, and he writes on the best CEO-authored blogs out there. I’ve known him for several years now, and take some pride in helping him get his feet wet with blogging, as we collaborated on the first iteration of his blog, then called The Hourglass Blog, which focused on generational issues.

But now he writes about all things leadership (and fiction, by the way, as he has written a novel!), and I’ve been especially impressed by the way he writes about the work he’s actually doing. He talks about his experiments and his efforts to build a stronger culture, while he’s doing it. This is called “working out loud,” and I wish more people would do it. For example, earlier this month he shared a post about creating a new strategic dashboard for his board that broke initiatives down among the categories of core, developing and experimental, and it included a red/yellow/green indicator of how successful the programs were. One of Eric’s insights:

The red lights always scare people. By themselves, they represent failures. They indicate that we failed to meet the identified metric of success of some of our programs–and some people don’t like to admit that. But in the context of our innovation matrix, the red lights also become part of our success. After all, innovation doesn’t happen without them.

His most recent posts are chronicling an internal project to identify organizational core values (even though he admits that he has some concerns about the idea of core values in organizations). One of his reflections:

Like every human organization, ours wasn’t (and still isn’t) perfect. There were some things we did really well, and there were some things that got in the way of our good performance, or which kept us from being as good as we were capable of being. If we were going to agree on a set of values which, if fully embodied, would optimally support our performance, I knew we were first going to need an honest conversation about A [values that help the association], B [values that hinder the association] and C [values that would help, but we don’t yet have].

I have a hard time convincing leaders to share this kind of thinking, processing, and learning with all their staff internally, let alone sharing it publicly on the internet! That’s courage. That’s a commitment to learning. That’s putting a primary value on enterprise performance. It’s a lesson for all of us to put our work out there, get feedback, start conversations, and elevate learning over ego. It can increase effectiveness dramatically.