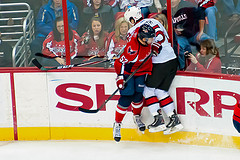 One of my favorite books that cuts across two of my favorite topics (truth and conflict) is Michael Roberto's Why Leaders Don't Take Yes for An Answer. He is the source of the definition I often use of consensus: it's not universal agreement–it is a combination of a high level of shared understanding with a high level of commitment.

In his chapter about candor, he provides a list of warning signs that your organization might have insufficient levels of candor, and the first one I thought was particularly awesome:

This metaphor apparently comes from research done about Jack Welch's reign at GE. Welch played hockey growing up in Massachusetts and described it as a game where you can crash someone into the boards during the game, but then go have a drink with him after. Apparently he treated his meetings the same way. He would follow you around the room hurling arguments and objections at you, and you were supposed to "fight back."

A lot of management meetings aren't like that. People say about one fourth of what they are thinking and then retreat back to their offices and departments where they say what they REALLY think or express objections they weren't comfortable saying in front of everyone.

Now, I also played hockey growing up in Massachusetts (though not with Welch), so I'm not sure I would take the hockey metaphor too far (hockey's love of violence is a problem if you ask me), but the basic point made by Roberto is spot on. In hockey you're wearing pads, so "getting physical" is designed to be relatively harmless. In our organizational meetings, we need the ability to get rough like that–not hurting anybody, mind you, but challenging them fully, maybe upsetting them, maybe even sparking an emotional reaction, because that is a part of being human. But we also stick with the conversation long enough to come to resolution. We push each other because we both share a commitment to truth and problem solving and its only when we push each other that you advance the conversation into new areas. Otherwise we stay stuck with the same problems, year in, year out.

We need to build our internal capacity to handle conversations like that–being rough without hurting anyone. More often than not, we come into organizations without the experience of being able to be direct and up front with people in organizational settings, particularly in the group setting of a meeting. In hockey we practice and we scrimmage. We figure out how to check people into the boards (people on our own team, no less, during practice) and we also learn how to be checked into the boards ourselves. It just becomes part of the game.

How can you provide opportunities like that in your organization, where people can learn to challenge and confront each other?