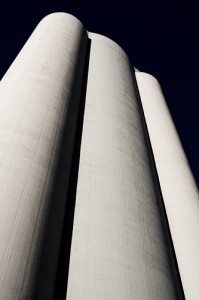 People have been complaining about “silos” in organizations for years and years. In solving one problem (putting people together in a department in order to deepen expertise and be efficient), we created some new ones (turf battles, lack of cooperation, poor information sharing, etc.). The proposed solution is typically to “bust” the silos, though I’m not sure what that means, really. I think usually people mean “force people in different departments to cooperate.” Great. Sounds like the old-fashioned style of change management that I like to call “change enforcement.”

It’s true our silos need to cooperate, but forcing them (while possible) is not very efficient. You end up having to constantly enforce it. I think a better approach is to focus on building the internal capacity that makes collaboration across silo lines easier and more natural. There are two important ways you can do this.

The first is to increase your internal capacity for systems thinking. Maddie and I write about this in Humanize, in Chapter 6 on being Open (and I blogged about it in 2011 too). If you can periodically distract your silos and get people all working on the same project, you will expand everyone’s understanding of what different departments actually do, and that builds capacity.

The second way is to train people in conflict resolution skills. It sounds simple, but the basic ability for two people in the workplace to identify areas where they are in conflict and then work through it to an agreeable solution is (a) critically important in organizations and (b) grossly lacking in most organizations. And in many cases, this inability to handle conflict is a huge factor in silo wars. It works like this:

In the course of your day you end up interacting with some people from that “other” department, and they do something that annoys your or makes you do extra work that you think is unnecessary. But instead of confronting those people and working it out, you avoid the conflict. And you end up designing your own work-around so this doesn’t happen again. But the resentment has started. Over time, more and more of these little annoyances happen, and quickly you have developed a pretty clear picture of this other department and how selfish they are, and how they’re not team players, and how they’re always creating extra work for you, etc. At this point, talking to them about it would be a huge deal, so you definitely keep avoiding it. The silo war is in full force. At this point, I’ve seen people actually intentionally sabotage the work of another department.

But if everyone has some basic conflict resolution skills, that pattern does not develop as easily. When they do something that messes you up, you talk to them. You give them the direct feedback, and you’re curious about why they decided to do it that way (rather than being judgmental). You’re good at getting underneath the initial answers to understand their interests, and then you’re both good at solving the problem in a way that works for everyone. Not only have you solved future problems, but you’ve also developed your systems thinking capacity a bit, because you know more about how that other department works.

I have a consulting project that focuses on silos, and it starts with conflict resolution training. Contact me if you’re interested.