The Future is Flatter 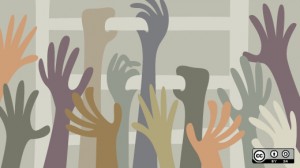 I’m always happy to see research that supports what we wrote about in Humanize. The lastest comes from an article in MIT’s Sloan Management Review about success Nestle had with a social media campaign. Two researchers in the UK concluded that a big part of the success could be attributed to the social media team’s ability to actually work around the existing hierarchy:

We believe that hierarchical structures can act as a barrier that prevents external knowledge of consumers from reaching the business; flatter, less bureaucratic structures seem to be as important to social media success as sophisticated data analysis. Nestle deployed a decentralized, cross-functional team spearheaded by an internal social media “champion” so the team could more easily traverse internal functions and departments and avoid the structural barriers that often hamper learning in Nestle, as at so many global companies.

What’s a little disconcerting is the casual way that the authors characterize the global companies and their inability to learn, as if that is something that is optional. Well, I guess it has been optional (they did become global companies without learning well), but it is becoming increasingly less so. Becoming flatter helps you learn. My money’s on the companies that figure that out sooner rather than later.